Posted on
For Sale (or Free); Miscellaneous; Services; Volunteer - DEADLINE : 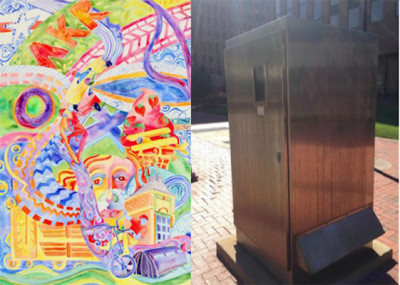 The Downtown Akron Partnership (DAP) Emerging Leaders will launch a second Kickstarter campaign on Oct. 5 for Akron Art Box, a public art project for Downtown Akron. The project will bring vibrancy and color to downtown with the installation of vinyl wraps on 10 utility boxes on Main Street, each representing a ward in Akron. The total budget for Akron Art Box is $11,150. Click here to support the Kickstarter campaign.

Artwork on utility boxes is a concept utilized in other cities to create an enlivened, safe and inspired environment. By commissioning neighborhood-inspired public art projects, Downtown Akron’s vibrancy will be enhanced to represent the citizens of the community and serve as a gateway to the city’s core.

“While gathering art for Akron Art Box it was awesome to see how incredibly passionate community members are about their neighborhoods,” said Jaclyn Flossie, president of DAP Emerging Leaders. “I’m excited to see how friends, family and neighbors work together to have their neighborhood represented and the diversity of our city displayed on Main Street.

Julie Hogarth, APS art teacher and artist for Ward 6, has seen this type of project in other cities and was intrigued from the beginning. Hogarth’s art represents the Ellet neighborhood as an active place that cares about their children and education, and is grounded in the local aviation history.

“As a child, we would sit at the Big Boy (long gone) and watch the planes take off and land, and once in a while catch sight of a blimp,” she said. “Most everyone in Akron has a story about a blimp, the Soap Box Derby or watching air traffic at the municipal airport. All these memories are rooted in Ellet.”

The utility box project brings together residents from all areas of the city to collaborate on a project that builds value for the arts community and strengthens civic pride. This relatively small-scale project is a simple way to make Akron more vibrant and livable.

The community is invited to make Akron a little more beautiful by contributing to Akron Art Box on Kickstarter. The DAP Emerging Leaders have 21 days to raise the money necessary to implement the project.

The Akron Art Box project would complement the Sidewalks with Soul project, a recent initiative focused on engaging people with place, inspired and led by Torchbearers Allyson Boyd and Kat Pestian. In an effort to enhance Downtown Akron as an attractive and desirable place to live, work and visit, former phone kiosks are wrapped in vinyl and will stream music from 91.3 the Summit onto Main Street.

The Akron Art Box project follows the success of the 2015 #LovetheWall project that funded a mural on the walls by the METRO Transit Center on S. Broadway. That campaign raised $14,500.

The mission of Downtown Akron Partnership (DAP) is to promote and build a vibrant and valuable downtown. DAP is a non-profit organization dedicated to bringing people, activity, business and a thriving civic life to the heart of Akron. Through strategic marketing, clean and safe programs and management of downtown’s resources, DAP works to promote downtown as a gathering place in the center of our community.

DAP’s members include property owners, business leaders and government officials who want to improve the image of downtown as a safe, convenient location for businesses, working professionals and families. DAP is governed by a board of trustees as diverse as the interests of our city. DAP is supported by the John S. and James L. Knight Foundation, Akron Community Foundation and GAR Foundation.