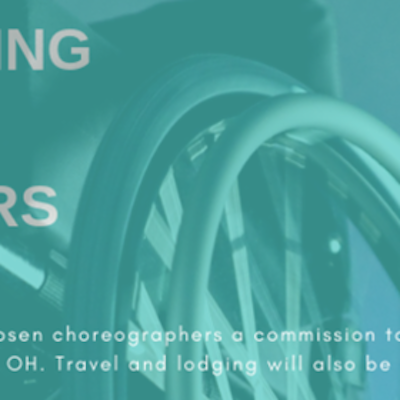 About the Choreographic Submission:

In the upcoming 2018/2019 season, Dancing Wheels is pleased to announce that we will be presenting a full evening concert entitled “Reverse * Reboot * Reveal”. As part of this project, we will commission three disabled choreographers to create new works on the Dancing Wheels Company and engage in the opportunity to learn or further develop their craft in the realm of physically integrated dance.  The three categories of choreographers are Advanced, Mid-Range and Emerging. We are thrilled to announce that Mr. Marc Brew, Artistic Director of AXIS Dance Company, has accepted our commission of his work in the category of Advanced Choreography.

These new works will receive their world premiere at a landmark concert presented by Dancing Wheels at Playhouse Square in Cleveland, OH on June 14, 2019, coinciding with the DanceUSA Conference convening in Cleveland. Following the premiere of the “Reverse * Reboot * Reveal” concert, the works will be excerpted by Dancing Wheels to construct a residency program exploring the history and societal impact of artists with disabilities and the physically integrated dance movement. This residency program will be part of our 2019/2020 national touring schedule, celebrating the 40-year anniversary of the Dancing Wheels Company & School.  The goal of the project is to advance Dancing Wheels’ global mission to promote and encourage the development of work by choreographers with disabilities.

The Dancing Wheels Company & School is an organization of artists with and without disabilities that educates, entertains and advocates through inclusive dance worldwide. The purpose of the organization is to provide artistic opportunities inclusively as the World Center for Integrated Dance & Arts Access.

The Dancing Wheels Company is the first and foremost physically integrated dance company in the United States, gaining a high community profile due to its unique nature and extensive performances. Since its inception in 1980, Dancing Wheels Company’s compelling performances and educational outreach programming have conveyed the philosophy of inclusive arts and reached audiences of over 5 million people worldwide including performances in Poland, Guatemala, the Czech Republic and Russia. The Company has been featured on CNN, Good Morning America, and on the ABC special “Christopher Reeve, A Celebration of Hope.”

Dancing Wheels has set the highest artistic standards with its unique dance vocabulary and innovative choreography, commissioned from some of America’s most distinguished choreographers including David Rousseve, Dianne McIntrye, Nai-Ni Chen, Stuart Pimsler, Mark Tomasic, Catherine Meredith, Keith Young, Donald McKayle and David Dorfman to name a few. The Company’s significant repertory of over 65 works has afforded the ability to appeal to numerous programming requests.