MAIL ART CALL FOR ENTRY! MAILGLO IN THE PHONE GALLERY

Posted by Waterloo Arts ; Posted on
Call for Artists - DEADLINE : 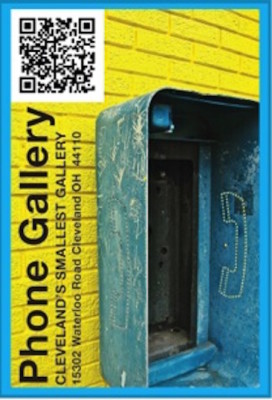 Waterloo Arts is accepting mail art entries to be exhibited in Cleveland’s Smallest Gallery, The Phone Gallery.  The exhibit will be run concurrently with DayGlo V during the months of January and February.  No entry fee or application is necessary.  Just mail your work, featuring fluorescent and DayGlo media, to Waterloo Arts by January 1, 2017.  Work will be exhibited under fluorescent lights and should have fluorescent media prominently featured.  There is a size restriction of 5”x7” maximum.  To submit your work, snail mail it to Waterloo Arts, 15605 Waterloo Road, Cleveland, OH 44110​.

The Phone Gallery – Cleveland’s smallest gallery – annexed to the front of Russ’ Auto Care in the Waterloo Arts District.  Originally conceived in 2013 by artist Ivana Medukic of ‘Project Pop-Up Galleries’ and freelance designer Ali Lukacsy, Phone Gallery demonstrates the transformation of an otherwise vacant and underutilized “space” – in this case, an abandoned phone booth – into an inventive place for art display. Until the Phone Gallery was transformed in summer 2013 by Ivana, Ali, and local handyman Doug Holmes, it was utility-less and phone-less. Now, Phone Gallery is always open thanks to an electrical source (light!) and its inherently public and highly visible location just west of E.156th Street on Waterloo Road.

DISCLAIMER: Phone Gallery is not liable for theft or damage. The renovation of the box is designed to be tamper-proof, however this is a public gallery that is “always open”. Subject matter must be suitable for public viewing.  Waterloo Arts retains the right to reject any work due to subject matter or space restrictions.   Work will not be returned and will become the property of Waterloo Arts at the end of the exhibition period.