Request for Qualifications for local artists 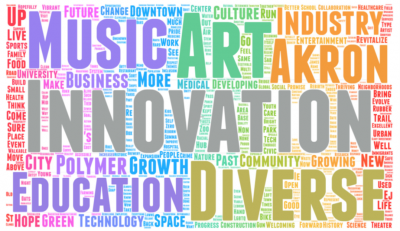 The Akron Civic Theatre, as part of its Staging the Future capital campaign, is requesting qualifications from artists who are interested in producing public artwork. The Capital Campaign is an exciting $8.5 million transformation of the “Jewel on Main Street” in downtown Akron, Ohio. For 90 years, the Akron Civic Theatre has been a hub of creative opportunities and a place to make lasting memories. Building upon that rich history, the goals of the Capital Campaign are to create a better entertainment experience and to make the outside of the Theater as much of a community asset as the inside, ensuring that it endures for generations to come.

Rather than submit proposals for specific project ideas, this RFQ seeks artists’ qualifications and general thoughts about this opportunity. The selected artists will work with the theater staff, the Capital Campaign Public Arts Task Force, and other key stakeholders to develop their specific innovative, original art related to the mission of the Akron Civic Theatre and in alignment with other aspects of the Capital Campaign that are well underway. *

Project Scope and Sites
The Public Arts Task Force is interested in artwork that is impactful and enhances the overall experience of the Akron Civic Theatre. The Task Force is open to both two-dimensional and three-dimensional art including functional art such as seating, bike racks, and more! The Akron Civic Theatre is located at 182 S. Main Street, Akron, Ohio 44308 and there are four sites (both inside and outside) in consideration for the public art. They are as follows:
·       Deck Overlooking Lock 3
·       Outdoor Patio at Wild Oscar’s/Lock 4
·       New Wall in Wild Oscar’s
·       Corner of Canal at Lock 3 and Lock 4

The public art in phase II will build upon the work of nationally renowned artists who were commissioned in 2020 to create public murals for the Civic.

Budget
The total budget for this project is $50,000. The Task Force anticipates commissioning 4-6 projects. The budget is all-inclusive and required to cover all public art related expenses, including, but not limited to, design or artist fee, engineering, fabrication, and installation.

*During 2020, as part of phase I of the public art initiative, the Civic Public Art Task Force facilitated a community survey asking people what words or themes come to mind when thinking about the city of Akron, the people of Akron, the culture of Akron and the future of Akron. The Task Force explained that findings would be shared with public artists to serve as a basis for their work. Please refer to the Akron Civic Theatre’s website for a few visuals of graphics at www.akroncivic.com.

Submission Requirements
Artists are required to submit a one-page narrative describing their qualifications and explaining why they would be interested in working on this project. Artists should indicate what approaches they would take to this project and make note of how they would integrate the goals of the theater and the capital campaign into developing their design.

Additionally, artists are required to submit, in electronic format:
·       An up-to-date CV or resume.
·       Up to 10 images depicting completed relevant work in JPEG or PNG format (none of the images may contain identifying information), suitable for inclusion in a PPT or PDF presentation; and
·       An annotated image list for the depicted artworks, including location, commissioning agency, materials, and total project budget. Artists should note what their role was in producing the works depicted if a team effort.

Submission deadline
Submissions must be received by Monday, March 15, 2021, 5:00 PM EST. Entries may be submitted electronically to Pamela Fine at email to: pfine@janussmallassociates.com.