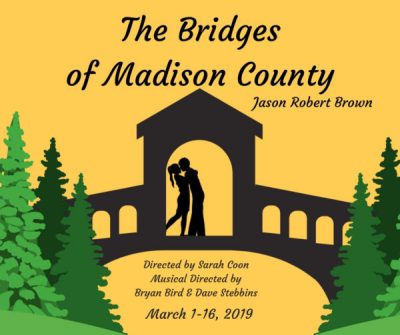 The Bridges of Madison County is based on Robert James Waller’s 1992 best-selling novel, and was developed by the Pulitzer- and Tony Award-winning creative team of Jason Robert Brown (The Last Five Years, Parade, Songs for a New World) and Marsha Norman (The Secret Garden, The Color Purple). This 2014 Broadway musical captures the lyrical expanse of America’s heartland along with the yearning entangled in the eternal question” “What if…?” Winner of the 2014 Tony Award for Best Score and Orchestrations, this sweeping romance about the roads we travel, the doors we open and the bridges we dare to cross will leave audiences breathless.

Francesca Johnson, a beautiful Italian woman who married an American soldier to flee war-ravaged Italy, looks forward to a rare four days alone on her Iowa farm when her family heads to the 1965 State Fair. When ruggedly handsome, National Geographic photographer, Robert Kincaid, pulls into her driveway seeking directions, though, what happens in those four days may very well alter the course of Francesca’s life.

With a soaring score and a heartbreaking story, The Bridges of Madison County is a touching and powerful addition to any theatre’s season. The tour de force roles of Francesca and Robert are a dream come true for any actor, while the ensemble is rich with characters that tell their own individual stories and receive plenty of focus on stage.

Callbacks if necessary after 8PM December 17, 2018

Please prepare one song in the style of the show but, not from the show. Callbacks (If needed) will consist of singing and cold reading from the show. There will be no dance audition for this show.

There are no equity contracts available for this show at this time.

Rehearsals will start early February 2019. This will be a short rehearsal period.

***The Roles of Robert and Francesca are not available at this time. ***

All ages are approximate, and suggest the character rather than the actor.

All characters will double as ensemble roles, including some featured solos.

All roles are open to actors of all ethnic and cultural backgrounds.