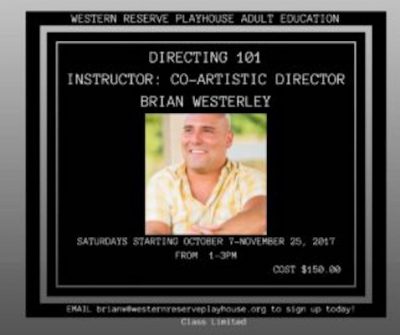 Brian has lived & worked in Ohio, Los Angeles & New York. While in L.A., Brian became an accomplished director, working with The Blank Theatre & Drama West. He also directed & starred in the world premieres of “The Day I Said Goodbye” & “Shark Tank,” as well as writing & directing the plays “Caught Up in a Moment” & “Denial is Not a River in Egypt.” Locally, Brian has directed productions of “Cat on a Hot Tin Roof,” “Pilots of the Purple Twilight,” “Lend Me a Tenor,” “Night of January 16th,” “Love Letters,” “The Senator Wore Pantyhose” & “Thumbs.” He took “Other Desert Cities” & “Confessions from the Ladies Room” to the Regional & State OCTA competitions, winning 11 awards total. He also currently serves as a regional adjudicator with OCTA.

The class will be presented on Saturdays, 10/7 – 11/25 from 1PM-3PM. Cost is $150. Accepting eight students per class. If more than eight students apply, an additional class may be added.

At the end of the eight weeks, the class will present the scenes they have chosen to an audience. Please email Brian at brianw@westernreserveplayhouse.org for more information & to sign up.