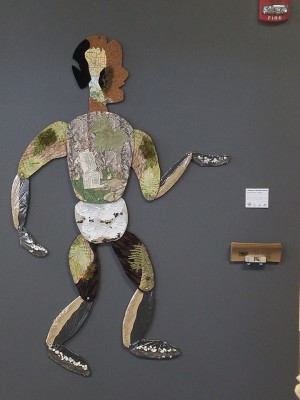 At 82 years young Jean Henriott Trawick creates in many facets and mediums of art, establishing her among fans and collectors as the “Grandma Moses” of the 21st century!

Recent work includes Spooklin – a book about a ghost named Spooklin who runs away from the Kingdom of Boo because he doesn’t want to wear the same sheet as everyone else.

Her work for the 2016 Akron Art Prize, I DREAMT OF THE BODY AKRON, makes the following statement:
“I dreamt of the BODY AKRON under seas 300 million years ago with sediment and limey shells on the bottom, the sandstone bedrock of Akron. As the seas deepened and receded, a hot, wet jungle grew:  ferns, scaly trees, amphibians, large cockroaches,dragonflies with 30 inch wingspan. It became colder as two glaciers slid down leaving deep ravines and steep hills with forests of oak, fens and marshes, where humans made trails and built the city Akron. I dreamt of the BODY AKRON through another 200 years while it changed as 11 million humans in NE Ohio cruelly drained its resources and deeply wounded it. Only recently have humans begun to repair and restore the BODY AKRON.”

In 2014 and 2015 she created 4 AKRON MY HOME SWEET HOME collages and THE  FACES of AKRON collage for the Akron Art Prize (which are now available as postcards at the Mustell Store and Rubber City Clothing).  The FACES of AKRON now hangs in  the Urban Eats Cafe.

She also works in graphic art, watercolor, and pen-and ink.