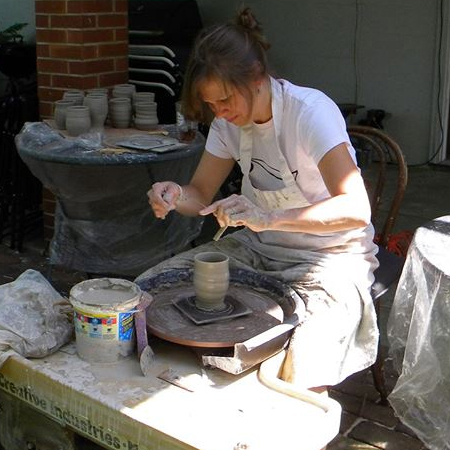 Artist Statement
I am not so interested in copying nature, but responding to it. Structures, fragments, systems, referencing objects large and small; microscopic, telescopic, and that which can be viewed by the naked eye.  Simple objects overlooked due to familiarity, suddenly invoking interaction. Gathering, collecting, deconstructing, reworking, studying. They are markers in time, signals, code.

My forms and surfaces are based on complex and beautiful microscopic organisms and objects of pro-generation, engaging and suggesting potential. The seeds, and the pods from which they emerge, are the connection to the continuation of a species. Some sharp and foreboding, others voluptuous and inviting, they create a narrative in the stages of their process.  They stack, interact, create new compositions. Their mystery and attraction elevate them to a higher status: celebratory ornaments, mystical objects, talismans, instruments, both in reality and metaphor.

The surface of the clay can be hard and glassy, or soft and earthy, creating a dynamic contrast and relationship with form.  I like these pieces to have their own mystery, an unknown quality that makes them familiar, perhaps, not recognized.  Whether seen as individuals or part of a group, a system, I think of these pieces as part of a larger environment