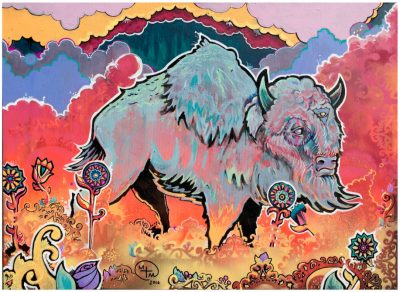 Matt Miller is a multi disciplinary artist from Akron, Ohio. He is a muralist, painter, illustrator and printmaker creating psychedelic pop art  inspired by his passion for mythology, American super hero comics and vintage rock n’ roll poster art.  After earning his BFA from the Mary Schiller Myers School of Art at the University of Akron, Matt went on to work as the apprentice and eventual studio assistant to the renowned sculptor and craftsman Don Drumm. Matt’s artwork has granted him several opportunities for world travel including a printmaking residency at the Frans Masareel Centrum Printmaking Studio in Kasterlee, Belgium and most recently a year of creative focus and development while living in France.  His printmaking work is held in the permanent collection of the Royal Museums of Fine Arts in Brussels, Belgium.

Most recently, Matt completed a series of murals for The Generator at Bounce Innovation Hub in downtown Akron.  He has created public murals for clients including the Barberton Public Library and several private murals ranging from restaurants to private residences.  Matt was the lead artist and designer of the “Clean & Bright” mural at the Downtown Laundromat in downtown Akron alongside the Art Bomb Brigade and ArtsLift groups.  Matt also helped in the completion of the “Chill” mural in Akron’s Historic Arts District.  Matt’s artwork has been shown extensively through the greater Akron and Cleveland areas and has been featured in The Devil Strip, the Akron Beacon Journal and on “Around Akron with Blue Green” on PBS.  Matt  has worked alongside several Akron area youth programs including Akron Arts Alliance, Summit County Youth Employment for Success, The Digital Media Camp and the Ellet Library.