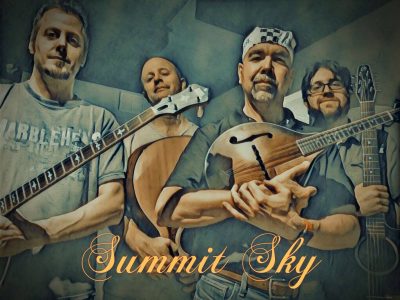 Summit Sky formed in late-2017 when longtime co-conspirators Jamie Still (guitar/vox) and Chris Matyus (banjo) began searching for musicians to round out the sizable catalog of songs they’d written together. Having recorded the song structures in a studio owned and operated by Matyus, the pair were in search of collaborators who could also sing and contribute lyrics, enter James Domingo (mandolin/vox) and Alex Hall (guitar/vox). Offering their skills on their respective instruments as well as their lyrical creativity, the addition of James and Alex gave way to instrumental and vocal arrangements of the music originally written by James and Chris. What resulted is a modern string band that incorporates elements of bluegrass, folk music, plus jazz chops and even acoustic riffage harvested from the members’ pasts as metalheads.

Summit Sky has already performed in some of Northeast Ohio’s best venues and as part of some of its best events as well. The band has amassed quite a lot of original material besides string arrangements of some of the members’ favorite songs written by others. You can find them playing in venues across Northeast Ohio, so look out for a live appearance near you.
SOCIAL MEDIA LINKS
https://www.facebook.com/SummitSkyOhio/