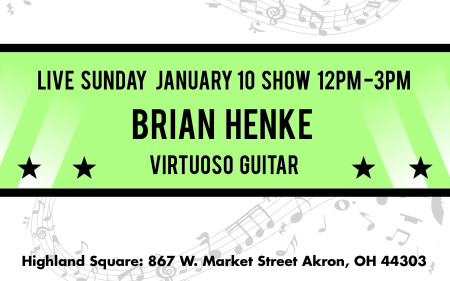 Brian Henke composes and performs his music like a painter putting images on canvas, drawing his inspiration from the world around him. An avid hiker, he often brings his guitar along to create a spontaneous response to his outdoor settings. Mother Earth (Terra) as artist has given an immense living gallery from the humbling spectacle of her natural wonders to the simple, beauty of a treetop against a blue sky. Her majestic legacy and the magical feeling of awe and peace inspire the compositions of this award winning virtuosic fingerstyle guitarist.

His unique guitar style has been called everything from Folk to New Age to Neo-Classical to Pastoral or as Brian likes to call it “a big stewpot of everything, stirred up, simmered and served to taste.” His music appeals to anyone who like their music lyrical, thought provoking and performed with virtuosity. Through it all is an undercurrent of spirituality and mysticism that Brian says is very much apart of the creative process. Because of this he has received radio air play on shows as varied as WKSU’s “Folk Alley” and John Dilberto’s “Echoes”. He has also shared the bill on the concert stage with acts as diverse as Yes, Linda Ronstadt, Steve Morse, Yngvie Malmsteen, Robin and Linda Williams, Richie Havens, Christine Lavin, TheKingston Trio, Glen Yarborough, Alison Brown, Adrian Belew, Spiro Gyra and many of the best acoustic guitarists in the world including Pete Huttlinger, Alex DeGrassi, Stephen Bennett, John Doan, Beppe Gambetta, Dan Crary, Laurence Juber and many, many others.

A winner of many acoustic and electric guitar awards, he has also been a finalist in the prestigious National Fingerstyle Contest in Winfield, Kansas, the National Guitarmageddon regional finals in Boston and New Age Reporters Top 10 for 2006.