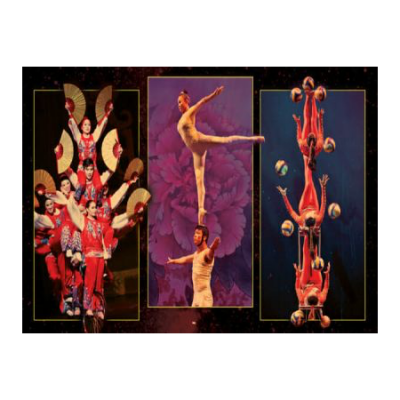 The Golden Dragon Acrobats hail from Cangzhou, Hebei province, in the People’s Republic of China and have toured the United States continuously since 1978. Its members are athletes, actors and artists who have studied and trained for their craft since early childhood. The group averages 200 performances each year and has toured through all 50 states and in over 65 countries across the world. In 2005, their Broadway debut and seven-week run at the New Victory Theater earned two prestigious New York Drama Desk Awards nominations (for Best Choreography and Most Unique Theatrical Experience). The troupe returned to the Broadway venue for the holiday 2014 season, making them the ONLY acrobatic troupe from China chosen to perform twice at this prestigious venue!

The group’s founder, producer and artistic director, Danny Chang, is one of the world’s leading promoters of Chinese acrobatics. He began his training at the age of eight with his family’s acrobatic school in Taipei, and joined its touring wing, the Golden Dragon Acrobats, at age ten. He is the recipient of many awards, including the prestigious Medal for International Faith and Goodwill by the Republic of China’s Coordination Council for North American Affairs. In 1998, Chang restructured the Golden Dragon Acrobats to form Asian Artists Productions, Inc. (AAPI). While the new company continued to produce and tour the Golden Dragon Acrobats, AAIP expanded to create theatrically elaborate shows like Circo Magnifico, Dream, Pagoda, Cirque D’or and others, each for a specific US market. In particular, Cirque Zíva (which premiered for ten straight weeks at Asbury Park Boardwalk’s Paramount Theatre), went on to tour across North America with a four-month premiere in 2013, and consecutive encore tours in 2014, 2015 and 2016.