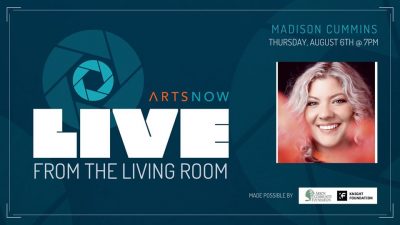 Live From the Living Room with Madison Cummins

Presented by ArtsNow at Online/Virtual Space

Join ArtsNow for our next installment of Live From the Living Room with singer and songwriter Madison Cummins on Thursday, August 6, 2020 at 7 PM – 8 PM.

Madison has played at assorted venues and events in Akron, Cleveland, and Athens, Ohio. Madison’s style includes influences of folk, classic rock, indie, and alternative music. Many of her songs draw inspiration from artists like Norah Jones, Sara Bareilles and Carole King. Her debut album, Odd Little Place, was released in 2013 and she continues to write and perform new music. Madison is planning her 2nd album release, Antidote, in 2020.

Thank you to Akron Community Foundation and Knight Foundation for making this series possible!

If you can’t be there for the live streaming, you can watch the video later on ArtsNow’s Facebook page.