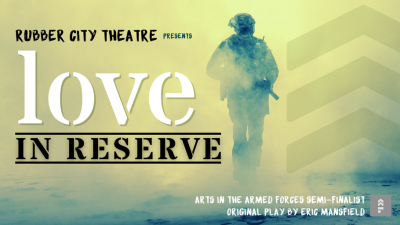 Synopsis
Ray and Kate Strong were high school sweethearts in Ohio. After graduation, Ray joined the Army, and Kate followed him as his training progressed. While they have been talking about marriage for several years, their wedding plans were sped up when Ray was mobilized for the Iraq invasion. Hours before Ray boarded a plane for the war, they were married in the post chapel in a hasty ceremony and no family present. It is nine months later when the play opens with Kate alone in their military apartment. She has been counting down the final days for Ray’s return home when she hears a news report of an attack at Ray’s base camp, Camp Freedom. Unable to get information about whether Ray is dead or alive, Kate fears the worst. This love story crescendos with sharp feelings, dramatic moments, and even some comedic levity all while draped in the constant uncertainty of whether Ray is already dead.