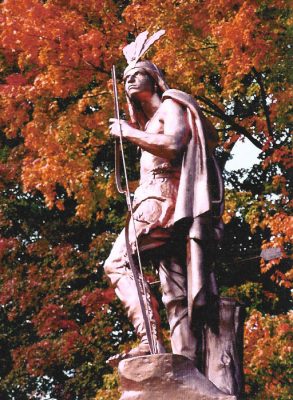 Located at New Portage Park in north Barberton at the intersections of Norton Ave and Wooster Road north. In 1911 Mayor Mitchell and a group of Barberton Citizens raised the necessary funds to erect a statue of Chief Hopocan to commemorate the early citizens of New Portage, now the North end of Barberton. Over its 90 year life the statue had become very weathered. However on Sunday, September 30, 2001, Mayor Hart and the City of Barberton were able to rededicate the statue which had been restored due to the efforts of the Barberton Noon Kiwanis Club. The rededication was held exactly 90 years and one day after the statue was originally dedicated in 1911. The Kiwanis raised nearly $9,000 to complete this important restoration project. The Society had been involved with Akron University student Pete Neugebauer in the duplication of an exact replica of the original pedestal, as well as the text for the statue’s plaques. We also have retired librarian Phyllis Taylor to thank for her help in this worth while effort. New Portage Park is Barberton’s oldest park. Why not stop by and see the newly restored statue.