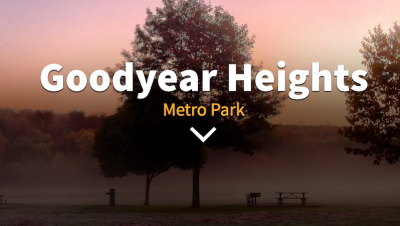 Thousands of pines and tulip trees were planted in the park. During World War II, Victory Gardens were planted along Newton Street on the former Waltz farm. In 1957, Charles Goodyear Memorial Pavilion was constructed. It served as the park district’s headquarters until 1974, when the offices were moved to Sand Run Metro Park.

Along the edge of Alder Pond, a cattail marsh provides refuge for a wide variety of wildlife, from Canada geese, red-winged blackbirds and Virginia rails to snapping turtles and muskrats. The pond also supports sphagnum moss and yellow birch trees. The park’s woods are home to owls, red fox, raccoons and other wildlife.