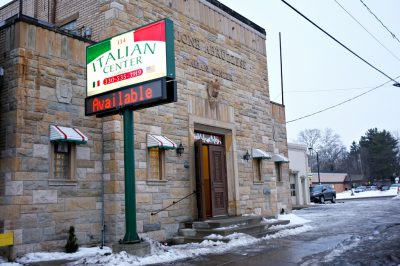 There are an endless number of Italian restaurants vying for your business these days but if you truly want an authentic Italian dining experience, check out The Italian Center in Akron’s North Hill neighborhood, every Thursday from 4 to 7 p.m.

As a nonprofit club, the Italian Center caters to the Italian society in the Akron area. Dominic Rizzo, organizer of the spaghetti dinners, said the money from the dinners goes toward the upkeep of the center.

Rizzo said the idea originated in 1988 when the presidents of the men’s society and women’s society agreed to provide spaghetti dinners in order to raise funds for the organization.

The club was founded in 1934 as a gathering place for the Italian immigrants who filled Akron’s North Hill. Many of them came to Akron from the Abruzzi region of Italy, and many in this crew still speak with accents of their homeland.

The club, like most ethnic clubs of that time, served as a unifying place for strangers in a strange land. A place where their traditions, their foods, and their language could be preserved in the midst of the middle-American landscape of Northeast Ohio.

The club and the hall above it– an event venue with stage– hosted more wedding receptions, graduations and first communion parties than anyone can count.