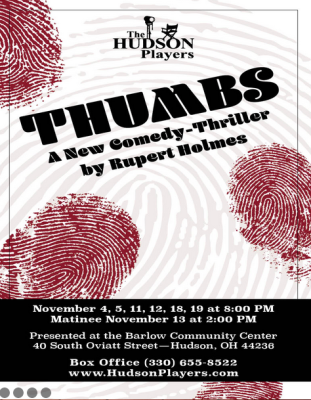 Set in an isolated cabin in Vermont, THUMBS is comic mystery of two equally clever women from two very different walks of life who will need all their wit and will to survive a cat and mouse game with a devious killer, the likes of which has not been seen before. This is an ingenious murder-mystery with an uproarious, farcical twist. Written by multiple Tony Award-winner Rupert Holmes, THUMBS is another hit for the genius behind Broadway smash hits THE MYSTERY OF EDWIN DROOD, CURTAINS and ACCOMPLICE.
(Perusal scripts available in the reference section of the Hudson Library).

Character Descriptions (From the script)

Audition forms and additional details available on our website as www.hudsonplayers.com. Auditions are open to all.