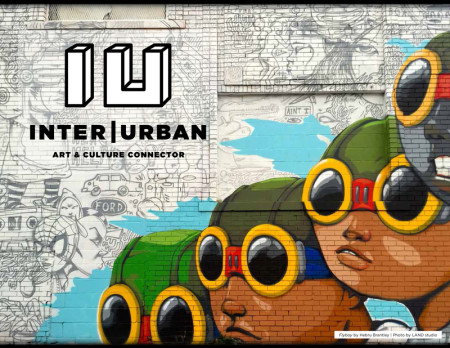 “‘Right now we are looking for any and all artists who are qualified and have portfolios in the realms of large-scale murals and photography,’ explains Joe Lanzilotta, LAND studio project manager. ‘We don’t want to dissuade anyone from applying for this, because this is something that will last for many years into the future.’” – Fresh Water Cleveland

“’This project showcases the power of the arts to transform community spaces,’ said Lillian Kuri, Cleveland Foundation Program Director for Architecture, Urban Design and Sustainable Development. ‘We believe it has the potential to turn the Red Line into a cultural attraction, especially by connecting the art to the Anisfield-Wolf Book Awards, an internationally-respected program born right here in Cleveland.'” – The Cleveland Foundation

ABOUT THE COMPETITION
(RFP taken from LAND Studio.)

The City of Cleveland, the Greater Cleveland Regional Transit Authority (RTA), and LAND studio are requesting qualifications from artists or teams of artists interested in participating in the creation of large-scale mural and photography projects along RTA’s Red, Blue, Green, and Waterfront rapid transit lines to be entitled as “the INTER|URBAN project.”

RTA provides transportation services for approximately 200,000 customers on a typical weekday, or about 50 million rides annually, through a variety of services. The Rapid Transit rail system consists of both heavy and light rail, connecting 9 million riders to 4 cities on 34 miles of track. As part of RTA and the City of Cleveland’s initiative to begin beautifying our rail lines, the INTER|URBAN will bring color and vibrancy to a heavily-traveled public transit system, beginning with 6-12 initial public art sites to be completed by Spring of 2016.

Because this is such an important and unique project, instead of the typical submission of pre-conceived proposals, artists will work with LAND studio, the Curatorial Team, and the Project Advisory Committee (representatives from NOACA, The Cleveland Foundation, the City of Cleveland, and RTA) to develop designs related to themes inspired by the Anisfield-Wolf Book Awards that celebrate the rich diversity of cultures and the artists, writers, and people that open and challenge our minds.

The Red Line Public Art Plan was prepared by LAND studio for the City of Cleveland and recommends a strategy for public art investment as well as outlines the benefits it could bring to the city and broader region. Since the initial Red Line Public Art Plan, the project has grown to include the Waterfront, Green, and Blue light rail lines –creating the INTER|URBAN project.

The rapid lines connect multiple municipalities and neighborhoods as well as many of Cleveland’s centers of economic importance, such as the airport, downtown, and University Circle. Greater attention to public art along the way will result in an art collection that will make travels on the rapid lines more pleasant, interesting, thought provoking,and beautiful. Additionally, the themes of cultural celebration create a space that encourages discourse on timely cultural issues.

This competition is open to all artists or teams of artists above the age of 18 that submit portfolios in response to this request for qualifications.

SUBMISSION REQUIREMENTS
Artists or teams are asked to submit links to portfolio websites, digital portfolios, or up to 12 relevant work samples in jpeg or pdf format. Submissions must include: Name, Email, Phone, and Website (if applicable)

For Phase 1, artists will be selected only through the request for qualifications process. Submitting a portfolio neither excludes nor includes artists in the process.

Implementing the INTER|URBAN will span multiple years as it involves the Red, Blue, Green, and Waterfront Lines. Artists submitting for this RFQ will be considered for both current and future phases of the project. Selected artists will be contacted for participation on particular sites by LAND studio staff when a location appropriate for their work is ready for a design.

SUBMISSION DEADLINE
Submissions to be considered for the initial phase of work, which is scheduled for implementation in Spring 2016, should be submitted no later than Friday, January 22, 2016. Entries can be submitted electronically to jlanzilotta@land-studio.org

Artists submissions will be evaluated by a selection panel consisting of members of the Curatorial Team, the City of Cleveland, RTA, RTA Arts-in-Transit Committee, and the Cleveland Foundation or their representatives.

THE CURATORIAL TEAM
The Curatorial Team will consist of Jasper Wong & Kamea Hadar of POW! WOW!, a Hawaii-based group dedicated to the proliferation of murals around the world, and Fred Bidwell, founder of the Transformer Station, a contemporary art museum and gallery located in Cleveland, Ohio. They will be working directly with the staff of LAND studio and the Project Advisory Committee. As part of the curatorial process, artists will be asked to reflect on and use general themes associated with the Anisfield-Wolf Book Awards as inspiration. The Anisfield-Wolf Book Awards celebrate authors of literary works with social justice and the celebration of diversity and people of all cultures and backgrounds.